How The 1099 Gig Economy Failed Workers And What Comes Next

When “gig work” first became popular, it was among highly paid, highly specialized contract workers who were able to build their own small businesses working for a variety of different employers. When it became mainstream through apps and the internet as a way for those in traditional hourly labor and customer service jobs, it became a problem.

The unfortunate reality of the gig economy is that the 1099 status of gig workers makes it far more difficult for them to achieve stability and financial security. This, combined with the high competition workers feel on gig apps, makes it challenging for anyone to achieve their goals through gig work.

These reasons are part of why we’re introducing the Gig Economy 2.0. We believe it should be easier for people to find good, flexible jobs, and that you shouldn’t have to sacrifice your financial security or career goals in order to have more control over when and where you work.

How The 1099 Gig Economy Failed

For the workers, this leads to a number of problems. To start, there’s a high cost of doing business. Unlike W-2 workers, whose employers provide the tools they need to work, 1099 contractors are expected to provide their own tools and pay for their own expenses. According to the IRS, the median self-employed person outside of the gig economy writes off 20 to 30 percent of their gross revenues, whereas gig workers typically write off closer to 60 percent. This means that gig workers’ wages need to be more than double what W-2 workers earn in order to have the same take-home pay. Yet they aren’t even guaranteed minimum wage.

The lack of protections and benefits creates additional burdens. For traditional W-2 workers, employers are required to pay federal payroll taxes, provide workers’ compensation, adhere to minimum wage and overtime laws, and more. When hourly workers turn to the gig economy for work, they instead take on these costs and risks.

The expenses start with workers’ paychecks, as 1099 contractor status forces the workers to pay the portion of FICA and Medicare taxes that employers would traditionally pay. This cost, typically shouldered by the employers, goes straight to gig workers instead.

Without a guaranteed wage or predictable hours, gig workers also often struggle financially. Their participation in the gig economy, marketed as an opportunity to be more independent, flexible, and financially secure, can take a significant toll on their financial wellbeing.

As 1099 contractors, gig workers are not entitled to their local minimum wage. And according to one Georgetown study, 100% of Uber drivers had difficulty calculating their pay. The idea that gig economy workers don't know their take-home pay is troubling, but it’s only the tip of the iceberg.

Not only are expenses high and wages difficult to calculate for many gig workers, they can also be much lower than what W-2 workers earn. With this in mind, it should be no surprise that one California-based study found 48 percent of gig workers were struggling with poverty.

There absolutely has to be a better way to provide the control workers want - the ability to pick their working hours or shifts, to select their employers, to start working quickly when they need additional cash. It’s important to recognize those needs and also the needs for stability, a living wage, benefits, worker protections, and unemployment insurance (it says a lot that the federal government is bailing out gig employers through the CARES Act and American Rescue Plan by providing these benefits to traditionally ineligible workers during the pandemic!).

What this means for workers

For some people, there is still a draw to gig work. When you’re searching for a new job, prioritize what is most important to you and know what you’re willing to compromise on. This will help you evaluate what you can afford, what you need most, and what type of job will be best for your exact situation.

Here are a few helpful questions to ask yourself:

1. How much (and what kind of) flexibility and control do I want?

There are a lot of definitions of flexibility at work - some people are drawn to 1099 gig work because of the rideshare model where they can start and stop work when they want. Others like the comfort of paid time off and sick days that come with W-2 status. Some want control to choose new jobs, employers, or shifts like they can as a W-2 Crew Member with Bluecrew.

Working as a 1099 contractor can turn out well for those who need completely flexible schedules, have access to affordable benefits, and have the financial means to accommodate for higher expenses and less reliable work. If you aren’t one of the lucky few with those resources, a W-2 job could provide a lot more security as well as better compensation.

3. What are my career goals?

At Bluecrew, we have a vision for the future: the Gig Economy 2.0. We believe the benefits and protections of W-2 employment should be accessible for everyone. We also believe it’s possible to provide employers with a flexible workforce without adding unnecessary overhead or taking advantage of workers.

We’re looking forward to a better future, where workers’ and employers’ interests align. Where hourly workers are offered better opportunities, and employers don’t have to worry about their workforce.

The protections and benefits of W-2 work are crucial for security and stability. That’s why every Crew Member is a W-2 employee of Bluecrew. Through the Bluecrew app, Crew Members have control to make their own decisions about schedule, workplaces, location, and pay. We are focused on ways to improve workers’ lives and experiences, providing support and a community for all workers, and building an experience that makes everyone want to work with us and our workplace clients.

Become part of the Gig 2.0 future by signing up today. 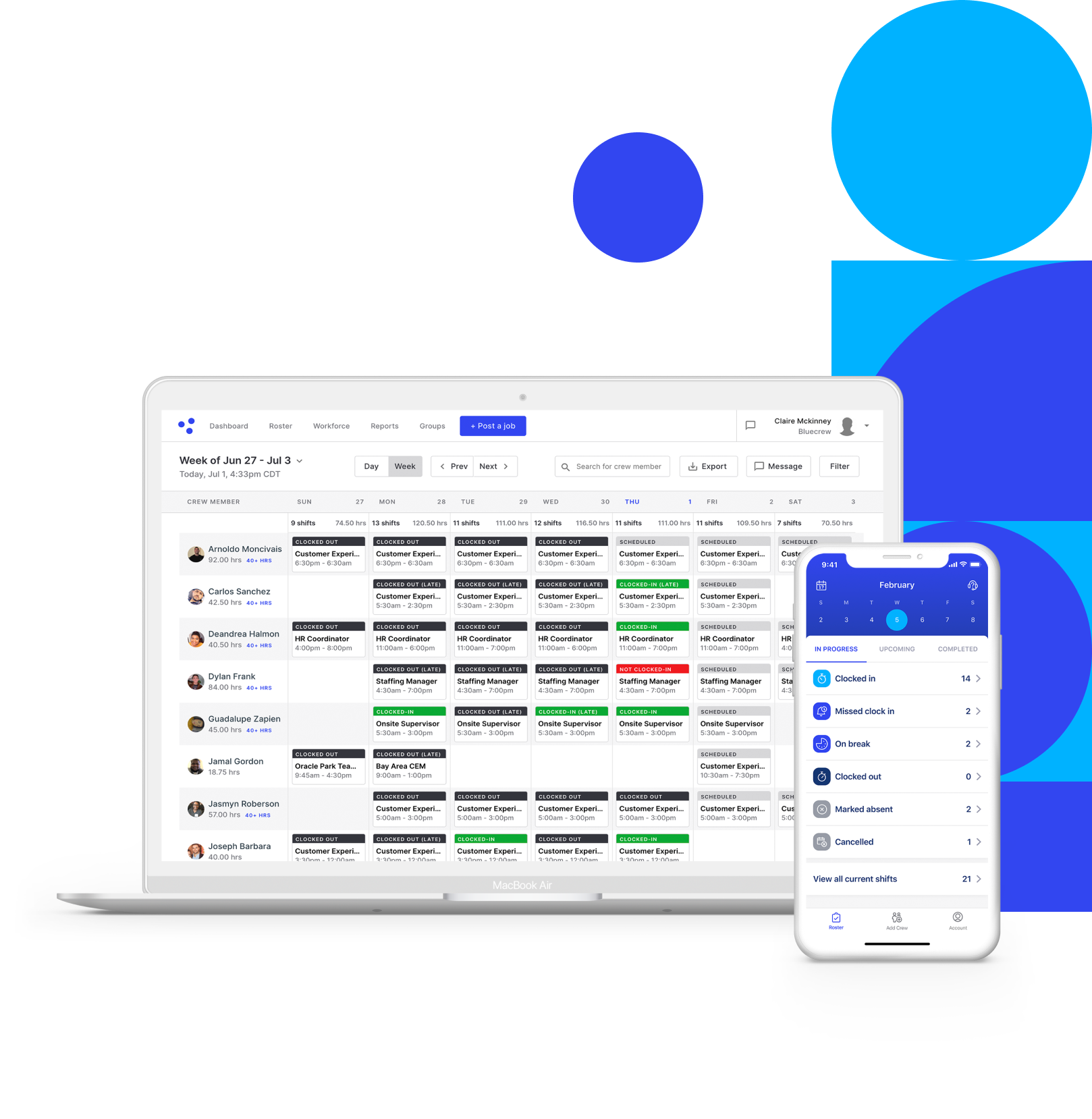